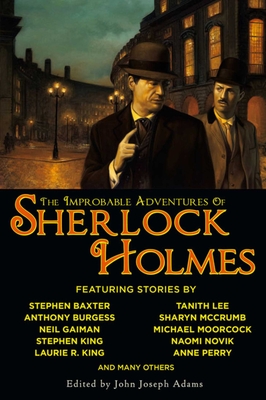 “Once you eliminate the impossible, whatever remains, no matter how improbable, must be the truth.”

The first—and most famous—consulting detective, Sherlock Holmes, came to the world’s attention more than 120 years ago through Sir Arthur Conan Doyle’s novels and stories. But Conan Doyle didn’t reveal all of the Great Detective’s adventures…

Here are the improbable adventures of Sherlock Holmes, where nothing is impossible, and nothing can be ruled out. These twenty-eight tales of mystery and the imagination detail Holmes’s further exploits, as told by many of today’s greatest storytellers, including: These cases will take you from the familiar quarters at 221B Baker Street to strange alternate realities; from the gaslit streets of London to the far future. In these pages you’ll find Holmes and Watson investigating ghosts, aliens, pirates, dinosaurs, shape-shifters, evil gods, and criminal masterminds, including the Napoleon of Crime, Professor Moriarty. You’ll be astounded to learn the truths behind cases alluded to by Watson but never before documented… until now. Whether mystery, fantasy, horror, or science fiction, no puzzle is too challenging for the Great Detective.

The game is afoot!

John Joseph Adams is the editor of the anthologies By Blood We Live, Federations, The Living Dead, Seeds of Change, and Wastelands: Stories of the Apocalypse. Forthcoming work includes the anthologies Brave New Worlds, The Living Dead 2, The Mad Scientist’s Guide to World Domination, and The Way of the Wizard. He is also the assistant editor at The Magazine of Fantasy & Science Fiction.

He received his Bachelor of Arts degree in English from the University of Central Florida in December 2000. He currently lives in New Jersey. For more information, visit his website at www.johnjosephadams.com.

This feature require that you enable JavaScript in your browser.
END_OF_DOCUMENT_TOKEN_TO_BE_REPLACED

This feature require that you enable JavaScript in your browser.
END_OF_DOCUMENT_TOKEN_TO_BE_REPLACED

This feature require that you enable JavaScript in your browser.
END_OF_DOCUMENT_TOKEN_TO_BE_REPLACED

This feature require that you enable JavaScript in your browser.
END_OF_DOCUMENT_TOKEN_TO_BE_REPLACED