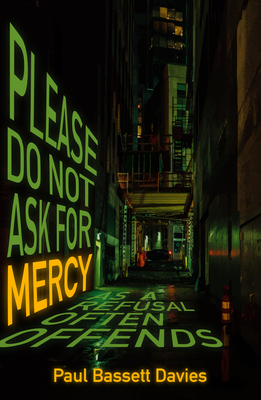 Detective Kilroy is assigned to investigate a horrible murder. He's a fine cop, from the brim of his hat to the soles of his brogues, but his inquiries, far from solving the mystery, lead him into a deeper one—and to Cynthia, an enigmatic woman with a secret that could overturn Kilroy's entire world. But where is this world? It seems both familiar and uncanny, with electric cars, but no digital devices, and the audience for a public execution arriving by tram. Meanwhile, the seas are retreating, and the Church exerts an iron grip on society—and history. Power belongs to those who control the narrative. Kilroy is forced to take sides between the Kafkaesque state that pays his wages, and the truth-seekers striving to destroy it, all the while becoming besotted with a woman who may only love him for his mind—in an alarmingly literal way.

Paul Bassett Davies contributed to the TV show Spitting Image, wrote the screenplay for the 2005 feature animation film The Magic Roundabout and has written and produced music videos with Kate Bush and Ken Russell. He is a former creative director of the London Comedy Writers Festival. He is the author of Dead Writers in Rehab.

"Mordantly funny—Poe would have enjoyed it." —Stephen King

"Davies knows how to keep the pages flying." —Publishers Weekly

This feature require that you enable JavaScript in your browser.
END_OF_DOCUMENT_TOKEN_TO_BE_REPLACED

This feature require that you enable JavaScript in your browser.
END_OF_DOCUMENT_TOKEN_TO_BE_REPLACED

This feature require that you enable JavaScript in your browser.
END_OF_DOCUMENT_TOKEN_TO_BE_REPLACED

This feature require that you enable JavaScript in your browser.
END_OF_DOCUMENT_TOKEN_TO_BE_REPLACED