The Weight of Snow (Paperback) 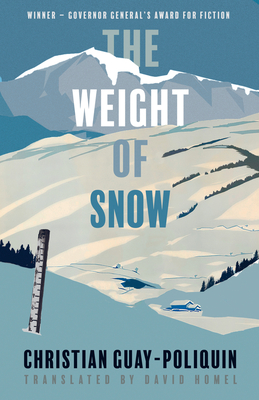 A badly injured man. A nationwide power failure. A village buried in snow. A desperate struggle for survival. These are the ingredients of The Weight of Snow, Christian Guay-Poliquin's riveting new novel. After surviving a major accident, the book's protagonist is entrusted to Matthias, a taciturn old man who agrees to heal his wounds in exchange for supplies and a chance of escape. The two men become prisoners of the elements and of their own rough confrontation as the centimetres of snow accumulate relentlessly. Surrounded by a nature both hostile and sublime, their relationship oscillates between commiseration, mistrust, and mutual aid. Will they manage to hold out against external threats and intimate pitfalls?

Christian Guay-Poliquin was born just north of the U.S. border in Saint-Armand, Quebec, in 1982. He believes the art of the narrative is grounded in the demands and details of daily life, situated in a world ripe with experience. He is currently developing a doctoral thesis on the hunting narrative. His two first novels, Running on Fumes and The Weight of Snow, were both published in English by Talonbooks, and in French by La Peuplade.

This feature require that you enable JavaScript in your browser.
END_OF_DOCUMENT_TOKEN_TO_BE_REPLACED

This feature require that you enable JavaScript in your browser.
END_OF_DOCUMENT_TOKEN_TO_BE_REPLACED

This feature require that you enable JavaScript in your browser.
END_OF_DOCUMENT_TOKEN_TO_BE_REPLACED

This feature require that you enable JavaScript in your browser.
END_OF_DOCUMENT_TOKEN_TO_BE_REPLACED