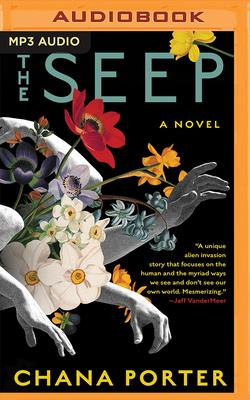 “The Seep describes a sort of utopia set in a near future devoid of capitalism, violence, and the general evils of the world. Here, everyone and everything (humans! trees! buildings!) is connected through an alien entity called The Seep, and pain of any kind is easily mended. This is an entirely surreal reading experience that explores identity — queer and racial, self and inherited — in an organic and necessary manner. A must-read for everyone.”
— Avery Peregrine, Third Place Books, Lake Forest Park, WA

“Funky, offbeat, and downright devourable, The Seep is about a middle-aged trans woman trying to find her way through a benevolent but bizarre alien invasion. After her wife decides to be reborn — literally, as a baby — she enters into a match of her own grief and suffering versus the parasitic aliens who want a perfect utopia free of pain. With two parts questions and one part answers, The Seep is a book that will leave you begging for more.”
— Lizy Coale, Copperfish Books, Punta Gorda, FL

"A unique alien invasion story that focuses on the human and the myriad ways we see and don't see our own world. Mesmerizing."
--Jeff VanderMeer

Trina FastHorse Goldberg-Oneka is a fifty-year-old trans woman whose life is irreversibly altered in the wake of a gentle--but nonetheless world-changing--invasion by an alien entity called The Seep. Through The Seep, everything is connected. Capitalism falls, hierarchies and barriers are broken down; if something can be imagined, it is possible.

Trina and her wife, Deeba, live blissfully under The Seep's utopian influence--until Deeba begins to imagine what it might be like to be reborn as a baby, which will give her the chance at an even better life. Using Seeptech to make this dream a reality, Deeba moves on to a new existence, leaving Trina devastated.

Heartbroken and deep into an alcoholic binge, Trina follows a lost boy she encounters, embarking on an unexpected quest. In her attempt to save him from The Seep, she will confront not only one of its most avid devotees, but the terrifying void that Deeba has left behind. A strange new elegy of love and loss, The Seep explores grief, alienation, and the ache of moving on.

This feature require that you enable JavaScript in your browser.
END_OF_DOCUMENT_TOKEN_TO_BE_REPLACED

This feature require that you enable JavaScript in your browser.
END_OF_DOCUMENT_TOKEN_TO_BE_REPLACED

This feature require that you enable JavaScript in your browser.
END_OF_DOCUMENT_TOKEN_TO_BE_REPLACED

This feature require that you enable JavaScript in your browser.
END_OF_DOCUMENT_TOKEN_TO_BE_REPLACED