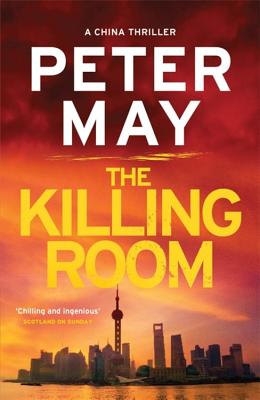 By Peter May
Email or call for price.
Out of Print

This is book number 3 in the The China Thrillers series.

"A SKILLED STORYTELLER WHO KNOWS HOW TO SERVE UP VIVID NARRATIVES, ROMANTIC ADVENTURES, COMPELLING CHARACTERIZATIONS, RIVETING PLOTS AND INTRIGUING VIEWS OF MODERN DAY CHINA." --BookLoons
"A BRISK, SOLIDLY PLOTTED POLICE PROCEDURAL, WITH LOTS OF GRITTY FORENSIC DETAILS." --Mystery Scene Magazine
Detective Li Yan and forensic pathologist Margaret Campbell travel to Shanghai, where a new ally--and a new enemy--await.
When a mass grave containing eighteen mutilated female corpses is discovered in Shanghai, detective Li Yan is sent from Beijing to establish if the bodies are linked to an unsolved murder in the capital. Here, Li will be working with Mei Ling, deputy head of Shanghai's serious crime squad.

Mei Ling is a formidable woman: a fact that is not lost on Li's on-again, off-again lover, forensic pathologist Margaret Campbell. But when Campbell, vulnerable and still grieving the death of her father, learns that the victims were subjected to "live" autopsies, she swallows her pride and joins Li Yan and Mei Ling in the hunt for the murderer.

As Li, Campbell, and Mei Ling enter the arena of a sickening nemesis they are forced to confront each of their very worst nightmares.

One of Scotland's most prolific television dramatists, May garnered more than 1,000 credits over a decade and a half spent as scriptwriter and editor on prime-time British television. Before quitting TV to concentrate on writing novels, he was the creator of three major series, two of which were the highest rated in Scotland. May lives and writes in France.

"Chilling and ingenious."
—Scotland on Sunday

"Rewarding . . . May offers a little politics, a little romance, and a lot of autopsy details."—Publishers Weekly

"Margaret's expertise is made more use of in this book than hitherto, and those who like discoveries from the mortuary slab will find this outing particularly satisfying. The urgency to find the culprit, the frustrations of the task, and the romantic entanglements mean that, as with earlier books in the series, there is barely a dull moment as the book rushes to an exciting conclusion."—Crime Review

Praise for Peter May
"Peter May is an author I'd follow to the ends of the earth."
—Marilyn Stasio, The New York Times

"He is a terrific writer doing something different."—Mark Billingham, bestselling author of the Tom Thorne series

"From the first page I knew I was in safe hands. I knew I could trust this writer."—Sophie Hannah, bestselling writer of The Monogram Murders

This feature require that you enable JavaScript in your browser.
END_OF_DOCUMENT_TOKEN_TO_BE_REPLACED

This feature require that you enable JavaScript in your browser.
END_OF_DOCUMENT_TOKEN_TO_BE_REPLACED

This feature require that you enable JavaScript in your browser.
END_OF_DOCUMENT_TOKEN_TO_BE_REPLACED

This feature require that you enable JavaScript in your browser.
END_OF_DOCUMENT_TOKEN_TO_BE_REPLACED