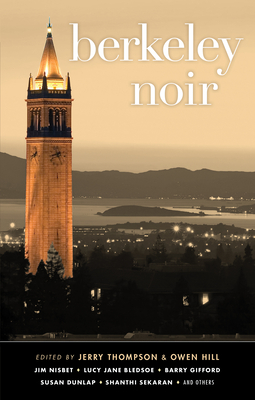 Berkeley brings its own unique blend of Bay Area noir, complementing the grit and grime that preceded it in San Francisco Noir and Oakland Noir.

My mom went to Berkeley in the 60s (my main tangential claim to hippiedom), so I'm psyched to see her favorite town get the Akashic noir treatment. San Francisco's hippie silo has long captured the imagination of artists and writers, and I can't wait to read the many stories in this collection, including new works from cult faves such Barry Gifford, Aya de Leon, Summer Brenner, and more.
--CrimeReads, included in CrimeReads' Most Anticipated Crime Books of 2020

Anyone who enjoys seeing a familiar setting from a new perspective will appreciate the gems in this edition.
--Berkeleyside

This volume proves yet again that noir is discoverable anywhere there are human beings--in this case, a quirky university town on the east side of San Francisco Bay...Another fine entry in a series for the ages.
--New York Journal of Books

Each story evokes the dark side of a Berkeley neighborhood and pays tribute both to the city's history as a haven for outcasts and as a literary metropolis. If you race through it, consider picking up San Francisco Noir and Oakland Noir.
--Diablo Magazine, a Top Ticket choice

At first consideration one might wonder if Berkeley has enough of a seedy underbelly to produce credible settings and stories for such an anthology? The writing proves it does.
--The Berkeley Daily Planet

Akashic Books continues its award-winning series of original noir anthologies, launched in 2004 with Brooklyn Noir. Each book comprises all new stories, each one set in a distinct neighborhood or location within the respective city.

A town named after a British philosopher doesn't exactly evoke visions of Goodis or Highsmith. Grifters? Dames? Cops? In Berkeley? On the surface the alleys don't seem that dark, until we look a little closer. Possibly the most iconic visual image of Berkeley does involve cops. It's the film with Mario Savio, atop a police car, declaring, There's a time when the operation of the machine becomes so odious, makes you so sick at heart, that you can't take part Now there's a statement that sums up the spirit of noir.

Berkeley Noir asks, If not here, where? When pulling together this outstanding list of authors, we were constantly reminded of Berkeley's rich literary history, one that swerves through varying shades of noir. Those who helped pave the way for this collection include Anthony Boucher, Janet Dawson, Margaret Cuthbert, Ellen Gilchrist, Linda Grant, Jonathan Lethem, and Barry Gifford. There will always be a place in the heart of this city where even outcasts can feel at home...The search through darkness for an authentic, eclectic voice is the most important ingredient in the rich stew that is Berkeley, California.

JERRY THOMPSON is a bookseller, poet, playwright, and musician. His work has appeared in ZYZZYVA and the James White Review. He is the coauthor of Images of America: Black Artists in Oakland. His fiction and prose have appeared in various anthologies including Voices Rising, edited by G. Winston James, and Freedom in this Village: Twenty-Five Years of Black Gay Men's Writing, edited by E. Lynn Harris. He is the coeditor of Oakland Noir.OWEN HILL is the author of two crime novels, The Chandler Apartments and The Incredible Double, and he coedited The Annotated Big Sleep with Pamela Jackson and Anthony Dean Rizzuto. Until recently he lived in the Chandler Building on the corner of Telegraph and Dwight in Berkeley.

This feature require that you enable JavaScript in your browser.
END_OF_DOCUMENT_TOKEN_TO_BE_REPLACED

This feature require that you enable JavaScript in your browser.
END_OF_DOCUMENT_TOKEN_TO_BE_REPLACED

This feature require that you enable JavaScript in your browser.
END_OF_DOCUMENT_TOKEN_TO_BE_REPLACED

This feature require that you enable JavaScript in your browser.
END_OF_DOCUMENT_TOKEN_TO_BE_REPLACED