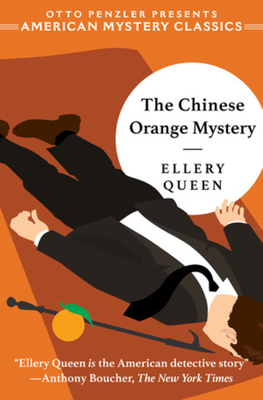 A topsy-turvy crime scene sends a detective on a puzzling quest for the truth.

The offices of foreign literature publisher and renowned stamp collector Donald Kirk are often host to strange activities, but the most recent occurrence­—the murder of an unknown caller, found dead in an empty waiting room—is unlike any that has come before. Nobody, it seems, entered or exited the room, and yet the crime scene clearly has been manipulated, leaving everything in the room turned backwards and upside down. Stuck through the back of the corpse’s shirt are two long spears—and a tangerine is missing from the fruit bowl. Enter amateur sleuth Ellery Queen, who arrives just in time to witness the discovery of the body, only to be immediately drawn into a complex case in which no clue is too minor or too glaring to warrant careful consideration.

Reprinted for the first time in over thirty years, The Chinese Orange Mystery is revered to this day for its challenging conceit and inventive solution. The book is a “fair-play” mystery in which readers have all the clues needed to solve the crime. In 1981, the novel was selected as one of the top ten locked room mysteries of all time by a panel of mystery-world luminaries that included Julian Symons, Edward D. Hoch, Howard Haycraft, and Otto Penzler.

Ellery Queen was a pen name created and shared by two cousins, Frederic Dannay (1905-1982) and Manfred B. Lee (1905-1971), as well as the name of their most famous detective. Born in Brooklyn, they spent forty-two years writing the greatest puzzle-mysteries of their time, gaining the duo a reputation as the foremost American authors of the Golden Age “fair play” mystery. Eventually famous on television and radio, Queen’s first appearance came in 1929 when the cousins won a mystery-writing contest with the book that would eventually be published as The Roman Hat Mystery. Besides co-writing the Queen novels, Dannay founded Ellery Queen’s Mystery Magazine, one of the most influential crime publications of all time. Although Dannay outlived his cousin by nine years, he retired the fictional Queen upon Lee’s death.

Otto Penzler, the creator of American Mystery Classics, is also the founder of the Mysterious Press (1975); Mysterious Press.com (2011), an electronic-book publishing company; and New York City’s Mysterious Bookshop (1979). He has won a Raven, the Ellery Queen Award, two Edgars (for the Encyclopedia of Mystery and Detection, 1977, and The Lineup, 2010), and lifetime achievement awards from Noircon and The Strand Magazine. He has edited more than 70 anthologies and written extensively about mystery fiction.

Without doubt the best of the Queen stories.
— The New York Times Book Review

This feature require that you enable JavaScript in your browser.
END_OF_DOCUMENT_TOKEN_TO_BE_REPLACED

This feature require that you enable JavaScript in your browser.
END_OF_DOCUMENT_TOKEN_TO_BE_REPLACED

This feature require that you enable JavaScript in your browser.
END_OF_DOCUMENT_TOKEN_TO_BE_REPLACED

This feature require that you enable JavaScript in your browser.
END_OF_DOCUMENT_TOKEN_TO_BE_REPLACED