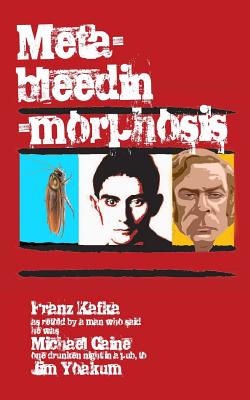 One night, in a London pub in the 1990's, I ran into a man who claimed to be the actor Michael Caine. The man said (in a thick Cockney accent): "'ere mate, if yer buy me a beer I will recite the bloomin' 'oole of Franz Kafka's classic tale of alienation, 'Metamorphosis, ' also known as 'Die Verwandlung.' If, however, yer chose not ter ffen I shall kick yer in the bleedin' balls." As I valued my balls very much I agreed... And so here is Kafka's 'Metamorphosis, ' as retold by a man in a pub who looked like, and who said that he was, Michael Caine. He may have been Michael Caine, I don't know, it was hard to tell. The pub was really dark and well, I'd had a few pint.

JIM YOAKUM has been a professional writer for over thirty years. He is an author and screenwriter. He has contributed articles to numerous magazines, websites and periodicals including Rolling Stone, The Onion and Goldmine. He was former writing partners with the late Graham Chapman of Monty Python and is U.S. Curator of the Graham Chapman Archives. He is also a professional musician. Some of his other writings can be seen at thearchivest.wordpress.com.

This feature require that you enable JavaScript in your browser.
END_OF_DOCUMENT_TOKEN_TO_BE_REPLACED

This feature require that you enable JavaScript in your browser.
END_OF_DOCUMENT_TOKEN_TO_BE_REPLACED

This feature require that you enable JavaScript in your browser.
END_OF_DOCUMENT_TOKEN_TO_BE_REPLACED

This feature require that you enable JavaScript in your browser.
END_OF_DOCUMENT_TOKEN_TO_BE_REPLACED