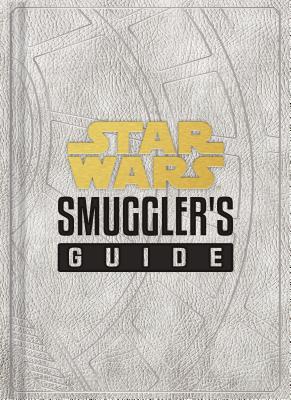 Recovered from a strongbox on the Millennium Falcon, this guide started as a simple logbook with a piece of valuable information.

But it was soon stolen, traded, and smuggled around the outer rim and shady ports, until it ultimately ended up in the hands of the outlaw Han Solo.

• The infamous logbook passed through the hands of such notorious characters as Maz Kanata, Hondo Ohnaka, Drydon Vos, and Lando Calrissian
• With each pirate, thief, gambler, and criminal who took possession of the book, new insights and details were added
• The result is a coveted collection of hidden treasure locations, advice, and hard-earned data

A must-have handbook to the galaxy's underworld, Star Wars®: Smuggler's Guide is a crucial and hugely entertaining read for fans seeking a deeper understanding of the saga.

Readers explore the checkered pasts of the galaxy's smugglers, thieves and pirates, with numerous tie-ins to the films.

• Reveals secrets and other juicy morsels of new information in the Star Wars® lore
• Perfect gift for Star Wars® fans of all ages who are eager to learn more about the Star Wars® universe
• Great for those who loved Star Wars: The Visual Encyclopedia by Adam Bray, Star Wars Encyclopedia of Starfighters and Other Vehicles by Landry Q. Walker, and Star Wars: 5-Minute Star Wars Stories by Disney Lucasfilm Press

Daniel Wallace is the New York Times–bestselling author of many books that explore the Star Wars® universe. He lives in Minneapolis.

"In this guide, recovered from a strongbox within the Millennium Falcon, Daniel Wallace beautifully weaves together not only the smuggling activities of colorful characters such as Maz Kanata, Dryden Vos, Dok Ondar, Lando Calrissian, Dexter Jettser (yes, Dex!), Hondo Ohnaka, and Han Solo, but he also gives you cool insights and details behind the entire Star Wars saga."
-Coffee with Kenobi

This feature require that you enable JavaScript in your browser.
END_OF_DOCUMENT_TOKEN_TO_BE_REPLACED

This feature require that you enable JavaScript in your browser.
END_OF_DOCUMENT_TOKEN_TO_BE_REPLACED

This feature require that you enable JavaScript in your browser.
END_OF_DOCUMENT_TOKEN_TO_BE_REPLACED

This feature require that you enable JavaScript in your browser.
END_OF_DOCUMENT_TOKEN_TO_BE_REPLACED