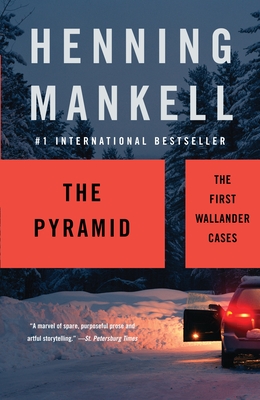 This is book number 10 in the Kurt Wallander Series series.

Revealing a side of Wallander that we have never seen, the long stories collected in The Pyramid are vintage Mankell. Here, we see Wallander on his homicide first case as a twenty-one-year-old patrolman, as a young father facing unexpected danger on Christmas Eve, as a middle-aged detective with his marriage on the brink, as a newly separated investigator solving the brutal murder of a local photographer, and finally as a veteran detective, with his signature methodical and instinctive work style, discovering unexpected connections between a downed plane and the assassination of a pair of spinster sisters. In these five riveting tales we watch Kurt Wallander come into his own not only as a detective but as a human being

Internationally bestselling novelist and playwright Henning Mankell has received the German Tolerance Prize and the U.K.’s Golden Dagger Award and has been nominated for a Los Angeles Times Book Prize three times. His Kurt Wallander mysteries have been published in thirty-three countries and consistently top the bestseller lists in Europe. He divides his time between Sweden and Maputo, Mozambique, where he has worked as the director of Teatro Avenida since 1985.

"Excellent. . . . Sure to bring [Mankell's] fans stampeding back into the fold."--The New York Times

“Kurt Wallander remains one of the most impressive and credible creations of crime fiction today.” –The Guardian, London

“This book is Mankell in top form. . . . For Mankell/Wallander fans [it is] a must read.”–The Midwest Review

“The Wallander series . . . [is] essential reading for all crime fiction fans, and this collection adds an indispensable chapter to the saga.”–Booklist

This feature require that you enable JavaScript in your browser.
END_OF_DOCUMENT_TOKEN_TO_BE_REPLACED

This feature require that you enable JavaScript in your browser.
END_OF_DOCUMENT_TOKEN_TO_BE_REPLACED

This feature require that you enable JavaScript in your browser.
END_OF_DOCUMENT_TOKEN_TO_BE_REPLACED

This feature require that you enable JavaScript in your browser.
END_OF_DOCUMENT_TOKEN_TO_BE_REPLACED