The War Reporter: A Novel (Hardcover) 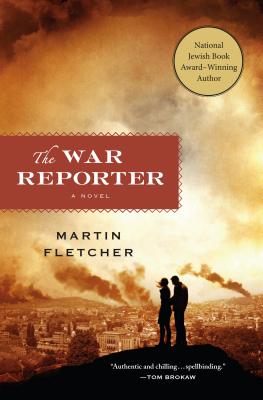 By Martin Fletcher
Email or call for price.
Out of Print

Winner of a Jewish National Book Award and author of The List and Jacob's Oath, both of which achieved outstanding critical acclaim, NBC Special Correspondent Martin Fletcher delivers another breathtaking tale of love, war, and redemption.

Tom Layne was a world-class television correspondent until his life collapsed in Sarajevo. Beaten and humiliated, he fell into a hole diagnosed as Post Traumatic Stress Disorder. Eleven years later he returns to the Balkans to film a documentary on the man who caused his downfall: Ratko Mladic, Europe's biggest killer since Hitler, wanted for genocide and crimes against humanity. Mysterious forces have protected Mladic for a decade, preventing his arrest, and these shadowy but deadly foes swing into action against the journalist. Tom soon falls into a web of intrigue and deceit that threatens his life as well as that of the woman he loves.

Drawing upon his own experiences reporting on the wars in Bosnia and Sarajevo, Martin Fletcher has written a searing love story and a painfully authentic account of a war reporter chasing down the scoop of a lifetime.

MARTIN FLETCHER is one of the most respected television news correspondents in the world and he is also rapidly gaining an equally impressive reputation as a writer. He has won many awards, including five Emmys, a Columbia University DuPont Award, several Overseas Press Club Awards, and the National Jewish Book Award. Fletcher and his wife, Hagar, have raised three sons. He spent many years as the NBC News Bureau Chief in Tel Aviv and he is currently based in Israel and New York, where he is a Special Correspondent for NBC News. He is also the author of Breaking News, Walking Israel, and The List.

“The War Reporter is an authentic and chilling tale of the perils of modern reporting in combat zones with no protection except the cunning and experience of the correspondent. Martin fletcher knows that. He's been there on more occasions than I can count-and he brings to this spellbinding and sensitive novel an up close and personal account of the dangers and the triumphs, loves, doubts and dilemmas of war reporting.” —Tom Brokaw

“Award-winning NBC News special correspondent Fletcher returns with an action-packed thriller where love and honor save the day...Fletcher's experience as a reporter adds authenticity...Fletcher is masterful at portraying realistic combat and showcasing the survival skills of working journalists. A fast-paced thriller that depicts the life-or-death realities of war correspondents.” —Kirkus on The War Reporter

"Noted NBC war correspondent for the Middle East and Tel Aviv bureau chief Martin Fletcher delivers a thrilling novel set in the 1990s, using his lengthy experiences as a journalist to take readers on a touching, stressful, and emotional ride through wartime Bosnia and Serbia. The book is action-packed while also exploring the complex personal relationships that develop in a volatile war setting...The War Reporter is a moving novel, a crisply written and believable story of modern-day war and its effect on human relationships that keeps readers fully engrossed from start to finish." —The Jewish Book Council

“A moving love story... A small gem of a novel.” —Booklist

“A powerful, affecting work . . . Should be required reading.” —Kirkus Reviews on The List

“Moving . . . A touching story that brings a little-known aspect of Jewish history to life.” —Booklist on The List

“Extraordinary. Both spellbinding and heartbreaking, with brilliantly rendered characters and a breathtaking conclusion.” —Andrea Mitchell, NBC on The List

“Extraordinary – a page turning thriller that pulls you in and won't let go.” —Jonathan Wilson, author of A Palestine Affair

“Fletcher's intense tales read more like a thriller than a memoir.” —Entertainment Weekly (A- review)

“For decades Martin Fletcher has been the gold standard of television war correspondents, and his new book is a real-life, cross-continent adventure story.... It's a great and moving read.” —Anderson Cooper

“A page-turner and a marvelous read.” —Connie Chung

“An elegantly written and evocative story of Holocaust survivors. Inspiring.” —Tom Brokaw on The List

This feature require that you enable JavaScript in your browser.
END_OF_DOCUMENT_TOKEN_TO_BE_REPLACED

This feature require that you enable JavaScript in your browser.
END_OF_DOCUMENT_TOKEN_TO_BE_REPLACED

This feature require that you enable JavaScript in your browser.
END_OF_DOCUMENT_TOKEN_TO_BE_REPLACED

This feature require that you enable JavaScript in your browser.
END_OF_DOCUMENT_TOKEN_TO_BE_REPLACED