The Conversation of the Three Wayfarers (Paperback) 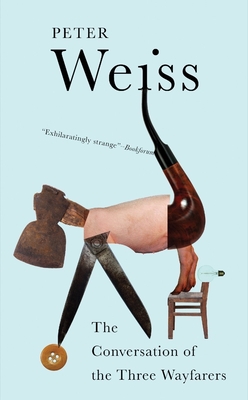 By Peter Weiss, E.B. Garside (Translated by), John Keene (Introduction by)
$12.95
Unavailable
Not Yet Published

This fast-moving, tightly-wound, and gleefully dark novella contains an entire universe in miniature

The Conversation of the Three Wayfarers is a tale overheard, rather than told directly. Abel, Babel, and Cabel, the wayfarers, carry on a three-sided monologue, each reporting curious incidents—the effect is of three capers rolled into one: a steeplechase performed on a floating pontoon. But are they really three distinct individuals? Why do their lives blend in such a fantastic manner? Weiss’s strikingly original prose has an impossibly contained quality, with each sentence doing a perfect double-double backflip before neatly landing. This essential rediscovered work, from the masterful and acclaimed German modernist Peter Weiss, will be a delightful discovery for readers of Kafka, Musil, and Gombrowicz.

Peter Weiss (1916–1982) was a German playwright, dramatist, visual artist, filmmaker, and novelist. His works include The Aesthetics of Resistance and The Shadow of the Coachman’s Body. He is best known in the US for his play Marat/Sade: Peter Brook’s production received the Tony Award for Best Play in 1966. His documentary drama The Investigation, which recreates the trial of Auschwitz concentration camp guards, was produced on American television in the 1960s. He was awarded the Georg Büchner Prize after his death in 1982.

E. B. Garside was a German translator and the author of The Man From Brazil.

John Keene is a former member of the Dark Room Writers Collective, a graduate fellow of Cave Canem, and the recipient of many awards and fellowships—including a MacArthur Genius Award, the Windham-Campbell Prize, and the Whiting Foundation Prize for fiction. Keene teaches at Rutgers.

Weiss remains among the most important postwar German authors no one’s read.
— Slate

Peter Weiss embarks on his literary work and enters purgatory. All his work is designed as a visit to the dead.
— W. G. Sebald

This feature require that you enable JavaScript in your browser.
END_OF_DOCUMENT_TOKEN_TO_BE_REPLACED

This feature require that you enable JavaScript in your browser.
END_OF_DOCUMENT_TOKEN_TO_BE_REPLACED

This feature require that you enable JavaScript in your browser.
END_OF_DOCUMENT_TOKEN_TO_BE_REPLACED

This feature require that you enable JavaScript in your browser.
END_OF_DOCUMENT_TOKEN_TO_BE_REPLACED