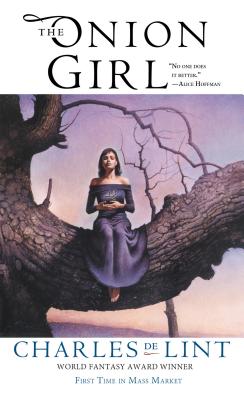 In novel after novel, and story after story, Charles de Lint has brought an entire imaginary North American city to vivid life. Newford: where magic lights dark streets; where myths walk clothed in modern shapes; where a broad cast of extraordinary and affecting people work to keep the whole world turning.

At the center of all the entwined lives in Newford stands a young artist named Jilly Coppercorn, with her tangled hair, her paint-splattered jeans, a smile perpetually on her lips--Jilly, whose paintings capture the hidden beings that dwell in the city's shadows. Now, at last, de Lint tells Jilly's own story...for behind the painter's fey charm lies a dark secret and a past she's labored to forget. And that past is coming to claim her now.

"I'm the onion girl," Jilly Coppercorn says. "Pull back the layers of my life, and you won't find anything at the core. Just a broken child. A hollow girl." She's very, very good at running. But life has just forced Jilly to stop.

Charles de Lint and his wife, the artist MaryAnn Harris, live in Ottawa, Ontario, Canada. His evocative novels, including Moonheart, Forests of the Heart, and The Onion Girl, have earned him a devoted following and critical acclaim as a master of contemporary magical fiction in the manner of storytellers like John Crowley, Jonathan Carroll, Alice Hoffman, Ray Bradbury, and Isabel Allende.

“De Lint is a romantic; he believes in the great things, faith, hope, and charity (especially if love is included in that last), but he also believes in the power of magic-or at least the magic of fiction-to open our eyes to a larger world.” —Edmonton Journal

“In de Lint's capable hands, modern fantasy becomes something other than escapism. It becomes folk song, the stuff of urban myth.” —The Phoenix Gazette

This feature require that you enable JavaScript in your browser.
END_OF_DOCUMENT_TOKEN_TO_BE_REPLACED

This feature require that you enable JavaScript in your browser.
END_OF_DOCUMENT_TOKEN_TO_BE_REPLACED

This feature require that you enable JavaScript in your browser.
END_OF_DOCUMENT_TOKEN_TO_BE_REPLACED

This feature require that you enable JavaScript in your browser.
END_OF_DOCUMENT_TOKEN_TO_BE_REPLACED