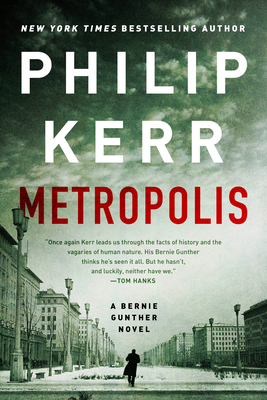 Summer, 1928. Berlin, a city where nothing is verboten. In the night streets, political gangs wander, looking for fights. Daylight reveals a beleaguered populace barely recovering from the postwar inflation, often jobless, reeling from the reparations imposed by the victors. At central police HQ, the Murder Commission has its hands full. A killer is on the loose, and though he scatters many clues, each is a dead end. It's almost as if he is taunting the cops. Meanwhile, the press is having a field day.

This is what Bernie Gunther finds on his first day with the Murder Commisson. He's been taken on beacuse the people at the top have noticed him--they think he has the makings of a first-rate detective. But not just yet. Right now, he has to listen and learn.

Metropolis is a tour of a city in chaos: of its seedy sideshows and sex clubs, of the underground gangs that run its rackets, and its bewildered citizens--the lost, the homeless, the abandoned. It is Berlin as it edges toward the new world order that Hitler will soo usher in. And Bernie? He's a quick study and he's learning a lot. Including, to his chagrin, that when push comes to shove, he isn't much better than the gangsters in doing whatever her must to get what he wants.

Philip Kerr was the New York Times bestselling author of the acclaimed Bernie Gunther novels, three of whichwere finalists for the Edgar Award for Best Novel. Kerr has also won several Shamus Awards and the British Crime Writers' Association Ellis Peters Award for Historical Crime Fiction. Just before his death in 2018, he was made a Fellow of the Royal Society of Literature. As P. B. Kerr, he is the author of the much-loved young adult fantasy series Children of the Lamp.

“Metropolis is a consummately told tale with lashings of vice and horror that works either as a gripping stand-alone in the Chandler mode or as the keystone of a 14-book arch with a deeper, more troubling flavor, and it's a perfect goodbye—and first hello—to its hero. In Metropolis, Bernie Gunther has, at last, come home.”—The Washington Post

“Kerr's 14th novel in this series proves to be Gunther's origin story, which makes it feel imperative as well as poignant...Arresting...Vivid.”—The New York Times Book Review

“[A] worthy auf Wiedersehen...The author's singular gifts for conveying the verbal, physical and moral textures of this vanished world are undiminished in Metropolis. The book offers similies worthy of Raymond Chandler.”—Wall Street Journal

“Fascinating, brilliantly researched...Just like Bernie, [Metropolis is] tough, funny, smart and pointed...An excellent introduction for newcomers and a fitting coda for longtime fans...Kerr's powerful series seems more vital than ever, with anti-Semitism, authoritarianism and white nationalism all on the rise. With a final bow from his flawed if improbably endearing hero, Kerr again reminds us: Never forget.”—Newsday

“Gunther is the perfect world-weary investigator for the glittering, doomed demi-monde of Weimar Berlin...Wonderfully plotted, with elegant prose, witty dialogue, homages to German Expressionism and a strong emotional charge, this is a bittersweet ending to a superb series.”—The Guardian (UK)

“Not only is Kerr’s eye for detail and character unparalleled; he balances mystery and history perfectly, like a blade in a skilled knife-fighter’s hand. . . If you’re looking for a historical thriller that’s deft with its history and its thrills, you couldn’t do better.”—Mystery Tribune

“Metropolis is Kerr’s and Bernie’s swan song—a brilliant Berlin opera of Goethe proportion with an intricate and riveting plot. And just like Fritz Lang’s Metropolis, Philip Kerr’s Metropolis is a masterpiece.”—New York Journal of Books

“Kerr displays again his special talent for reflecting individual depravities against the broad canvas of a society collapsing upon itself. It's fascinating to see a younger Bernie here, with the makings of the melancholic wiseass and world-class cynic he will soon become, but still just a tad vulnerable (and still learning to hold his liquor). The Bernie Gunther series is one of the great triumps of modern noir, and it will be sorely missed.”—Booklist (starred review)

“This book is plenty timely. But completed shortly before the author's death, it is also one of Kerr's most congenial, beautifully controlled, and entertaining works. The banter is priceless. Going against the grain—as usual—by writing an origin novel as his swan song, Kerr leaves his fans happy.”—Kirkus Reviews (starred review)

“Gripping...Kerr does a fine job of immersing the reader in the seamy side of Weimar Germany... Fans will be sorry to see the last of the honest, wisecracking Bernie.”—Publishers Weekly

“Kerr saved some of his best work for last… Metropolis shows once again why Philip Kerr was one of the most talented novelists of his generation, and his final novel is one his fans won’t soon forget.”—The Real Book Spy

“Berlin during the time of the Third Reich’s reign is a perfect location to spotlight desperation, suspense, and death. Philip Kerr mastered both his plots and his characters, making this one thriller you do not want to miss.”—Suspense Magazine

This feature require that you enable JavaScript in your browser.
END_OF_DOCUMENT_TOKEN_TO_BE_REPLACED

This feature require that you enable JavaScript in your browser.
END_OF_DOCUMENT_TOKEN_TO_BE_REPLACED

This feature require that you enable JavaScript in your browser.
END_OF_DOCUMENT_TOKEN_TO_BE_REPLACED

This feature require that you enable JavaScript in your browser.
END_OF_DOCUMENT_TOKEN_TO_BE_REPLACED