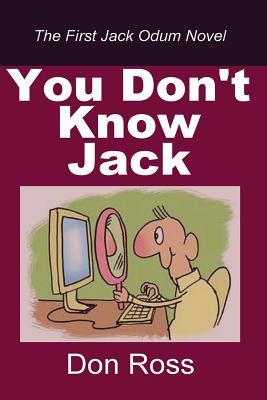 ***** Raves for 'You Don't Know Jack' "Fans of Lewis Grizzard, Art Buchwald and Mark Twain, take heart. A new star is on the horizon. Don Ross, with a stroke of h is magical pen the loosing of a highly imaginative mind, revives the laid-back homey humor that stirred so many hearts and caused so many smiles, bringing joy to the young and the young at heart alike. Ross's hero - or perhaps anti-hero - Jackson (Jacko) Odum is one of the 'good ole country boys' who take live as it comes (and a few other things as well) and washes it down with something you don't find in drug stores. Highly amusing at all times and outrageously humorous on occasion, Ross in his debut at humor has crafted a masterpiece. Whether read in the living room, bedroom or bathroom, Ross's spoof of a novice author will keep you coming back for more." ....Jonathan Penroc Author, War of the Gods series.

I am a former broadcaster taking my first steps into the print world. For thirty of my forty plus years in journalism, I wrote feature news as a reporter at WTVD-TV in Raleigh-Durham, North Carolina. I had a ninety second time slot each night to present amusing off-beat stories that earned me a local reputation as a humorist and led to several AP, UPI, RTNDA and regional Emmy awards and nominations. My first attempts at humor writing were at my first real TV job at WTAJ in Altoona, Pennsylvania where I always volunteered to write a "kicker" to end the newscast on a light note. The Altoona TV job was offered after I covered news for WFBG Radio in Altoona while simultaneously obtaining a degree in International Politics from Penn State. My plans to become a foreign correspondent never panned out but I satisfy a desire for foreign travel by going abroad at least once a year. I developed an interest in world affairs and international travel during a four year stint in the Air Force where I was a deejay and news broadcaster with The American Forces Radio and Television Service in Pakistan and Italy. I qualified for AFRTS thanks to my experience deejaying and news reading and writing at my hometown radio station, WCPA, in Clearfield, Pennsylvania. Retired now, I live in Wrightsville Beach, North Carolina with my wife, Mary, who I met while stationed in Italy forty years ago. I have two children who live in the Charlotte-area and they have each given us two grandchildren.

This feature require that you enable JavaScript in your browser.
END_OF_DOCUMENT_TOKEN_TO_BE_REPLACED

This feature require that you enable JavaScript in your browser.
END_OF_DOCUMENT_TOKEN_TO_BE_REPLACED

This feature require that you enable JavaScript in your browser.
END_OF_DOCUMENT_TOKEN_TO_BE_REPLACED

This feature require that you enable JavaScript in your browser.
END_OF_DOCUMENT_TOKEN_TO_BE_REPLACED