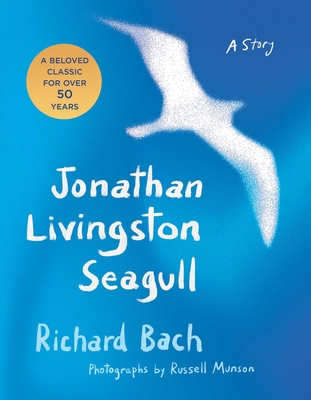 People who make their own rules when they know they're right...people who get a special pleasure out of doing something well (even if only for themselves)...people who know there's more to this whole living thing than meets the eye: they'll be with Jonathan Seagull all the way. Others may simply escape into a delightful adventure about freedom and flight. Either way it's an uncommon treat.

Richard Bach, a former USAF pilot, gypsy barnstormer, and airplane mechanic, is the author of fifteen books. This, his fourth book, spent two years on the New York Times bestseller list and has continued to inspire millions for decades. His website is RichardBach.com.

Ernest K. Gann This book is a new and valuable citizen in that very wondrous world ruled by St.-Exupéry's Little Prince. I suspect all of us who visit the worlds of Jonathan Seagull will never want to return.

Ray Bradbury Richard Bach with this book
does two things.
He gives me Flight.
He makes me Young.
For both I am deeply grateful.

This feature require that you enable JavaScript in your browser.
END_OF_DOCUMENT_TOKEN_TO_BE_REPLACED

This feature require that you enable JavaScript in your browser.
END_OF_DOCUMENT_TOKEN_TO_BE_REPLACED

This feature require that you enable JavaScript in your browser.
END_OF_DOCUMENT_TOKEN_TO_BE_REPLACED

This feature require that you enable JavaScript in your browser.
END_OF_DOCUMENT_TOKEN_TO_BE_REPLACED