The Fellowship of the Ring: Being the first part of The Lord of the Rings (Paperback) 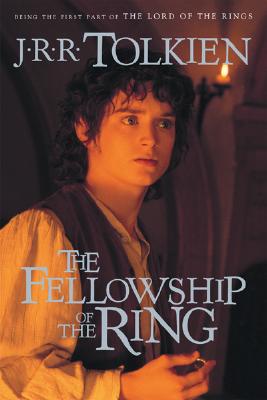 Part one of The Lord of the Rings, now featuring film art on the cover.
In ancient times the Rings of Power were crafted by the Elven-smiths, and Sauron, the Dark Lord, forged the One Ring, filling it with his own power so that he could rule all others. But the One Ring was taken from him, and though he sought it throughout Middle-earth, it remained lost to him. After many ages it fell into the hands of Bilbo Baggins, as told in THE HOBBIT. In a sleepy village in the Shire, young Frodo Baggins finds himself faced with an immense task, as his elderly cousin Bilbo entrusts the Ring to his care. Frodo must leave his home and make a perilous journey across Middle-earth to the Cracks of Doom, there to destroy the Ring and foil the Dark Lord in his evil purpose.

“A work of immense narrative power that can sweep the reader up and hold him enthralled for days and weeks.” The Nation

"Among the greatest works of imaginative fiction of the twentieth century." Sunday Telegraph

“Tolkien’s stories take place against a background of measureless depth…That background is ever-present in the creator’s mind and it gives Frodo and company a three-dimensional reality that is seldom found in this kind of writing.” The Washington Post

“A masterful story — an epic in its own way — with elements of high adventure, suspense, mystery, poetry and fantasy.” Boston Herald

This feature require that you enable JavaScript in your browser.
END_OF_DOCUMENT_TOKEN_TO_BE_REPLACED

This feature require that you enable JavaScript in your browser.
END_OF_DOCUMENT_TOKEN_TO_BE_REPLACED

This feature require that you enable JavaScript in your browser.
END_OF_DOCUMENT_TOKEN_TO_BE_REPLACED

This feature require that you enable JavaScript in your browser.
END_OF_DOCUMENT_TOKEN_TO_BE_REPLACED