Fool Me Once (Hardcover) 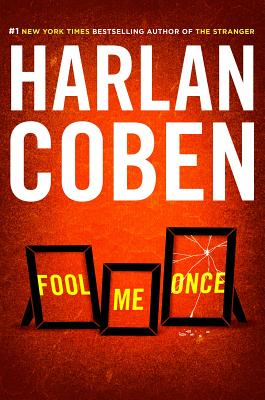 A widowed veteran gets the shock of her life in this impossible-to-put-down thriller from #1 New York Times bestseller Harlan Coben.

In the course of eight consecutive #1 New York Times bestsellers, millions of readers have discovered Harlan Coben’s page-turning thrillers, filled with his trademark edge-of-your-seat suspense and gut-wrenching emotion. In Fool Me Once, Coben once again outdoes himself...

Former special ops pilot Maya, home from the war, sees an unthinkable image captured by her nanny cam while she is at work: her two-year-old daughter playing with Maya’s husband, Joe—who was brutally murdered two weeks earlier. The provocative question at the heart of the mystery: Can you believe everything you see with your own eyes, even when you desperately want to? To find the answer, Maya must finally come to terms with deep secrets and deceit in her own past before she can face the unbelievable truth about her husband—and herself.

With more than seventy million books in print worldwide, Harlan Coben is the #1 New York Times bestselling author of thirty novels, including the Myron Bolitar series and a series aimed at young adults featuring Myron's newphew, Mickey Bolitar. His books are published in forty-three languages around the globe and have been number one bestsellers in more than a dozen countries. The winner of the Edgar, Shamus, and Anthony Awards, he lives in New Jersey.

Praise for Harlan Coben and Fool Me Once

“Coben is simply one of the all-time greats—pick up any one of his thrillers and you’ll find a riveting, twisty, surprising story with a big, beating heart at its core.”—Gillian Flynn, bestselling author of Gone Girl

“[A] stellar standalone...Coben is like a skilled magician saving the best, most stunning trick for the very end.”—Publishers Weekly (starred review)

“Harlan Coben, master of the suburban thriller, has written another compelling and twist-filled tale with ‘Fool Me Once.’…The unpredictability of the story will keep readers literally turning the pages to try and figure out what is really going on. Even those savvy enough to figure out some of the ending will not uncover everything, and the whopper of a payoff not only will have jaws dropping, but also demonstrates Coben's skill as a writer.”—Associated Press

“Coben has done it again with this fast-paced, smart thriller.”—Library Journal (starred review)

“Harlan Coben has long been the master of the jaw-dropping twist. But in Fool Me Once, he knocks our legs out from under us as well...[it] just might be his crowning achievement.”—Providence Journal

“This was one of Coben’s greatest unexpected endings!”—Suspense Magazine

“Harlan Coben is a master of his craft and a wizard with words...Fool Me Once is him at his best and there is no shame in having him trick us one more time. In fact most of us will be begging him to fool us again and again and again.”—Jackie K. Cooper, Book Critic, The Huffington Post

This feature require that you enable JavaScript in your browser.
END_OF_DOCUMENT_TOKEN_TO_BE_REPLACED

This feature require that you enable JavaScript in your browser.
END_OF_DOCUMENT_TOKEN_TO_BE_REPLACED

This feature require that you enable JavaScript in your browser.
END_OF_DOCUMENT_TOKEN_TO_BE_REPLACED

This feature require that you enable JavaScript in your browser.
END_OF_DOCUMENT_TOKEN_TO_BE_REPLACED