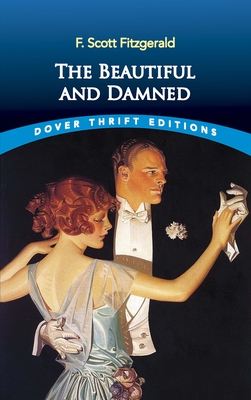 In this follow-up to his tremendously successful first novel, This Side of Paradise, F. Scott Fitzgerald again recaptures the Jazz Age's darker side as well as its excitement and joie de vivre.The Beautiful and Damned traces the meteoric path of two glittering young socialites. Building their marriage on the shaky foundation of an expected inheritance, they devote themselves to hedonistic pursuits that lead to moral and financial bankruptcy.
The characters' self-indulgence and mutual destruction anticipated the tragic lives of Scott and his flapper wife, Zelda. The Fitzgeralds regarded the world as a stage and their lives as performances, and their glamorous doings became as well-known as any of Scott's books. In an eerie foreshadowing of the real-life couple's rapid descent into ruin, this lyric, compulsively readable narrative examines the perishable nature of dreams in the face of reality--a theme scrutinized with profound effect in the book's esteemed successor, The Great Gatsby.

The literary reputation of F. Scott Fitzgerald (1896-1940) is noted for its popular appeal as well as its critical acclaim. His novels and short stories recapture the excitement and joie de vivre of the Jazz Age as well as its darker side, as evidenced by his most popular book, The Great Gatsby.

This feature require that you enable JavaScript in your browser.
END_OF_DOCUMENT_TOKEN_TO_BE_REPLACED

This feature require that you enable JavaScript in your browser.
END_OF_DOCUMENT_TOKEN_TO_BE_REPLACED

This feature require that you enable JavaScript in your browser.
END_OF_DOCUMENT_TOKEN_TO_BE_REPLACED

This feature require that you enable JavaScript in your browser.
END_OF_DOCUMENT_TOKEN_TO_BE_REPLACED