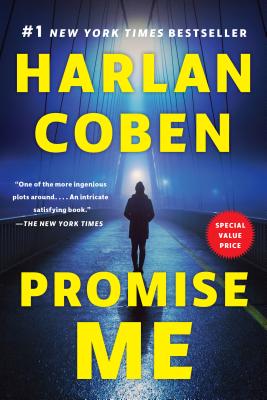 This is book number 8 in the Myron Bolitar series.

The bestselling author and creator of the hit Netflix drama The Stranger reveals the deadly consequences that can be born of the best intentions.

As the school year winds down, Myron Bolitar is determined to help keep his friends’ children safe from the dangers of drinking and driving. So he makes two neighborhood girls promise him that if they are ever in a bind but are afraid to call their parents, they must call him. Several nights later, the call comes at two a.m. The next day, a girl is missing and Myron is the last person who saw her. Racing to find her before she’s gone forever, Myron must outrun his own troubled past and decide once and for all who he is and what he will stand up for...

With more than seventy million books in print worldwide, Harlan Coben is the #1 New York Times bestselling author of thirty novels, including the Myron Bolitar series and a series aimed at young adults featuring Myron's newphew, Mickey Bolitar. His books are published in forty-three languages around the globe and have been number one bestsellers in more than a dozen countries. The winner of the Edgar, Shamus, and Anthony Awards, he lives in New Jersey.

Praise for Promise Me

“The reappearance of Myron Bolitar is welcome, indeed....This book has [page turning suspense] in spades.”—Chicago Sun-Times

“Supersuspense maestro Coben has again given us an addictive page-turner with plenty of twists, turns, plots, and subplots.”—Forbes

“A hard-edged plot with yet more strands of suburban desperation...After finishing Promise Me, you realize that all the clues to the twists were evident, but you still didn’t see it coming.”—The Philadelphia Inquirer

“A deftly written, well-plotted exploration of the tender underbelly of life in the New Jersey suburbs, where all is not as it seems.”—The Columbus Dispatch

This feature require that you enable JavaScript in your browser.
END_OF_DOCUMENT_TOKEN_TO_BE_REPLACED

This feature require that you enable JavaScript in your browser.
END_OF_DOCUMENT_TOKEN_TO_BE_REPLACED

This feature require that you enable JavaScript in your browser.
END_OF_DOCUMENT_TOKEN_TO_BE_REPLACED

This feature require that you enable JavaScript in your browser.
END_OF_DOCUMENT_TOKEN_TO_BE_REPLACED