The Other Side of Silence (A Bernie Gunther Novel #11) (Paperback) 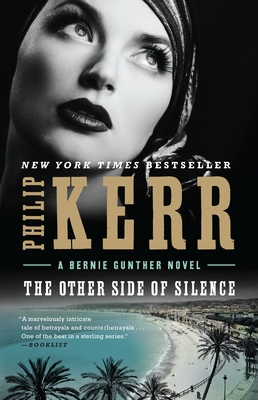 When Bernie Gunther takes on a blackmail case and gets involved in the affairs of British spies, the former detective risks exposing his own dark past in this thrilling novel hailed by The New York Times Book Review as “one of Kerr’s best.”

Saint-Jean-Cap-Ferrat, 1956. Having gone into hiding in the French Riviera, Bernie Gunther is working as a concierge at the Grand-Hôtel under a false name. His days and nights consist of maneuvering drunks to their rooms, shooing away prostitutes in search of trade, and answering the mindless questions posed by the absurdly rich guests—needless to say, he’s miserable. Now, the man who was once a homicide detective and unwilling SS officer in Hitler’s Third Reich is simply the person you turn to for touring tips or if you need a bridge partner.

As it just so happens, a rich and famous writer needs someone to fill the fourth seat in a regular game at the Villa Mauresque. But Somerset Maugham wants Bernie to help him get out of a game far more dangerous than bridge. Maugham is being blackmailed—perhaps because of his unorthodox lifestyle, or perhaps because, once upon a time, Maugham worked for the British Secret Service...

Philip Kerr was the New York Times bestselling author of the acclaimed Bernie Gunther novels, three of which—Field Gray, The Lady from Zagreb, and Prussian Blue—were finalists for the Edgar Award for Best Novel. Kerr also won several Shamus Awards and the British Crime Writers’ Association Ellis Peters Award for Historical Crime Fiction. Just before his death in 2018, he was made a Fellow of the Royal Society of Literature. As P.B. Kerr, he was the author of the much-loved young adult fantasy series Children of the Lamp.

Praise for Philip Kerr and the Bernie Gunther Novels

“Philip Kerr is the only bona fide heir to Raymond Chandler.”—Salon.com

“In terms of narrative, plot, pace and characterization, Kerr’s in a league with John le Carré.”—The Washington Post

“Just as youth is wasted on the young, history is wasted on historians. It ought to be the exclusive property of novelists—but only if they are as clever and knowledgeable as Philip Kerr.”—Chicago Tribune

“Kerr quantum leaps the limitations of genre fiction. Most thrillers insult your intelligence; his assault your ignorance.”—Esquire

“A richly satisfying mystery, one that evokes the noir sensibilities of Raymond Chandler and Ross Macdonald while breaking important new ground of its own.”—Los Angeles Times

“Part of the allure of these novels is that Bernie is such an interesting creation, a Chandleresque knight errant caught in insane historical surroundings. Bernie walks down streets so mean that nobody can stay alive and remain truly clean.”—John Powers, Fresh Air (NPR)

“The Bernie Gunther novels are first-class, as stylish as Chandler and as emotionally resonant as the best of Ross Macdonald.”—George Pelecanos

This feature require that you enable JavaScript in your browser.
END_OF_DOCUMENT_TOKEN_TO_BE_REPLACED

This feature require that you enable JavaScript in your browser.
END_OF_DOCUMENT_TOKEN_TO_BE_REPLACED

This feature require that you enable JavaScript in your browser.
END_OF_DOCUMENT_TOKEN_TO_BE_REPLACED

This feature require that you enable JavaScript in your browser.
END_OF_DOCUMENT_TOKEN_TO_BE_REPLACED