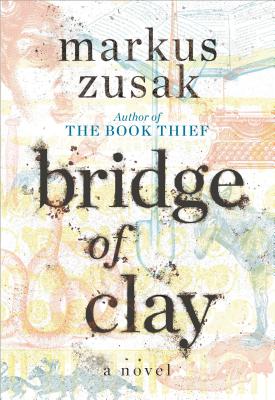 “There’s a reason we’ve been waiting for this book for over 10 years, and that’s because Zusak has taken his time and made it perfect. Bridge of Clay is weird and heartbreaking and beautifully and poetically written — in short, everything that Zusak does so well in the books we’ve come to love. He writes in stunning, complex metaphors that never fail to feel real. Clay and his brothers are alive in this story, and the love that they share between themselves and for others is palpable. I loved being with Clay as he built his bridge, and I was genuinely devastated as the pages came to an end. This one is going to take me a long time to get over. Bridge of Clay was worth every second of the wait.”
— Jess Harwick, Book Culture, New York, NY

“Five brothers, a menagerie, a murderer, and Michelangelo make for a memorable cast of characters. Throw in bridge building, track training, horse racing, courting, and grieving, and readers get a vivid look into the lives of the Dunbar boys. And these rough and tumble boys go through it all! When I finished Bridge of Clay, I wanted to read it again, to watch the boys get out of bed, off the sofa, pick up the bits and pieces, and live another day.”
— Margaret Brennan Neville, The King's English Bookshop, Salt Lake City, UT

The unforgettable, New York Times bestselling family saga from Markus Zusak, the storyteller who gave us the extraordinary bestseller THE BOOK THIEF, lauded by the New York Times as "the kind of book that can be life-changing."

"One of those monumental books that can draw you across space and time into another family’s experience in the most profound way." —The Washington Post

"Mystical and loaded with heart, it's another gorgeous tearjerker from a rising master of them." —Entertainment Weekly

The breathtaking story of five brothers who bring each other up in a world run by their own rules. As the Dunbar boys love and fight and learn to reckon with the adult world, they discover the moving secret behind their father’s disappearance.

At the center of the Dunbar family is Clay, a boy who will build a bridge—for his family, for his past, for greatness, for his sins, for a miracle.

The question is, how far is Clay willing to go? And how much can he overcome?

Written in powerfully inventive language and bursting with heart, BRIDGE OF CLAY is signature Zusak.

Markus Zusak is the international bestselling author of six novels, including The Book Thief and most recently, Bridge of Clay. His work is translated into more than forty languages, and has spent more than a decade on the New York Times bestseller list, establishing Zusak as one of the most successful authors to come out of Australia.
All of Zusak’s books – including earlier titles, The Underdog, Fighting Ruben Wolfe, When Dogs Cry (also titled Getting the Girl), and The Messenger (or I am the Messenger) – have been awarded numerous honors around the world, ranging from literary prizes to readers choice awards to prizes voted on by booksellers.
In 2013, The Book Thief was made into a major motion picture, and in 2018 was voted one of America’s all-time favorite books, achieving the 14th position on the PBS Great American Read. Also in 2018, Bridge of Clay was selected as a best book of the year in publications ranging from Entertainment Weekly to the Wall Street Journal.
Markus Zusak grew up in Sydney, Australia, and still lives there with his wife and two children.

“This book is a stunner. Devastating, demanding and deeply moving, Bridge of Clay unspools like a kind of magic act in reverse, with feats of narrative legerdemain concealed by misdirection that all make sense only when the elements of the trick are finally laid out.” —Wall Street Journal

"In a complex narrative that leaps through time and place and across oceans, Zusak paints a vivid portrait of the brothers trying to regain their balance by keeping their family’s story alive." —Time

“It blew me away.” —Jodi Picoult, bestselling author of A Spark of Light and Small Great Things

“A captivating book with a mighty, fearless heart, BRIDGE OF CLAY is filled with characters to believe in and care about ... achingly moving, delightfully funny, and thoroughly uplifting.” —M. L. Stedman, bestselling author of The Light Between Oceans

“If The Book Thief was a novel that allowed Death to steal the show . . . [its] brilliantly illuminated follow-up is affirmatively full of life.” —The Guardian

“Warm and heartfelt. . . . This is a tale of love, art and redemption; rowdy and joyous, with flashes of wit and insight, and ultimately moving.” Times of London


Praise for The Book Thief by Markus Zusak:

"Deserves a place on the shelf with the Diary of Anne Frank . . . Poised to become a classic." --USA Today

"Zusak doesn't sugarcoat anything, but he makes his ostensibly gloomy subject bearable the same way Kurt Vonnegut did in Slaughterhouse-Five: with grim, darkly consoling humor." –Time

This feature require that you enable JavaScript in your browser.
END_OF_DOCUMENT_TOKEN_TO_BE_REPLACED

This feature require that you enable JavaScript in your browser.
END_OF_DOCUMENT_TOKEN_TO_BE_REPLACED

This feature require that you enable JavaScript in your browser.
END_OF_DOCUMENT_TOKEN_TO_BE_REPLACED

This feature require that you enable JavaScript in your browser.
END_OF_DOCUMENT_TOKEN_TO_BE_REPLACED