Beyond the Sea: A Novel (Hardcover) 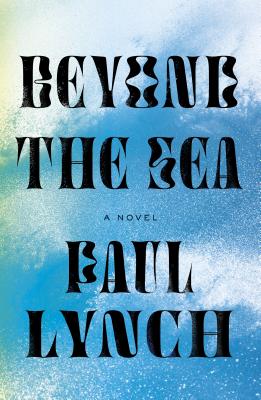 "Beyond the Sea is frightening but beautiful." --M John Harrison, The Guardian

Based partly on true events, Paul Lynch’s haunting and sublime novel Beyond the Sea tells the story of two South American fishermen, Bolivar and Hector, who go to sea before a catastrophic storm. Needing cash, Bolivar convinces his boss to let him fish despite the weather. His fishing partner is nowhere to be found, so he brings Hector, a sullen and inexperienced teenager. The storm arrives, and though the two men survive, they’ve been blown hundreds of miles out in the Pacific Ocean with little hope for rescue.

Coming to terms with their new reality, they are forced to accept their separation from the modern world, their sudden and inescapable intimacy, and the possibilities and limits of faith, hope, and survival. As the days go by, they grapple with the mistakes of their pasts, the severity of their present, and the uncertainty of their future. And though Bolivar and Hector fight to maintain their will to live, nothing in the barren seascape or in their minds promises that they will make it.

Ambitious and profoundly moving, Beyond the Sea explores what it means to be a man, a friend, and a sinner in a fallen world. With evocative prose, Lynch crafts a suspenseful drama that refuses sentimentality or easy answers. Instead, Beyond the Sea is a hard-won and intimate rendering of the extremities of human life, both physical and mental.

Paul Lynch is the author of the novels Red Sky in Morning, The Black Snow, which won France’s Prix Libr’a Nous for Best Foreign Novel, and Grace, which won the Kerry Group’s Irish Novel of the Year Award and was a finalist for both the Walter Scott Prize for Historical Fiction, and the Saroyan International Prize. He lives in Dublin with his wife and daughter.

"[Bolivar and Hector] build a friendship that is artfully portrayed by Lynch, who resists the temptation to romanticize their connection, instead spotlighting its volatility, fractiousness and intensity . . . [Beyond the Sea] articulates Lynch's literary preoccupations striking clarity . . . its pages are alive with elegance and insight." --Oliver Eagleton, The Times Literary Supplement

"Lynch demonstrates a control over his ideas that comes from a pure lyrical telling, a speech act that, if you let it, will take you anywhere. Beyond the Sea is frightening but beautiful." --M John Harrison, The Guardian

"An epic with, as epics should have, more than a touch of poetry about it, and possibly the grimmest, but also most beautifully written, novel set at sea that I have read since William Golding’s Pincher Martin.” --Andrew Stuttaford, New Criterion

"[Lynch’s] novels are artistic creations… Lynch’s concern is not only the minutiae of survival or men battling the elements, although his account of these is exciting and persuasive. His main interest lies in the existential struggle within: how men handle themselves in extremis… His fourth novel has echoes of Melville, Dostoyevsky and William Golding." —The Sunday Times (London)

"[Lynch] uses brevity to keep the heat on, in terms of emotion and drama. At the same time, the narrative carries considerable intellectual weight; brevity here does not translate to fast and easy reading. On the contrary—the prose, while fluid, is packed with enough ideas to make you want to pause and reflect after every section, as when reading poetry." --Matt Walker, The Rumpus

"Lynch manages to transform a news story into a universal tale of friendship and endurance and love . . . Beyond the Sea is elemental. It is a story sliced to the bone. It compels the reader to look unblinkingly at matters of life and death, at the heart of what it means to be fully human." --Michael Pearson, New York Journal of Books

"This is a book that will leave you feeling thoroughly wrung out by the final page, but also happy to be alive.” — Roger Cox, The Scotsman

"Paul Lynch is one of our greatest writers, and Beyond the Sea is his best work yet. A sublime, elemental, fever dream of a novel that constantly tests us, tempts us, and guides us. This is a work of art that relentlessly and slyly captures not only the trials of the human spirit, but what we are doing to our environment, our world, and to each other--a profound, unforgettable journey, one I urge you to experience."—Paul Yoon, author of The Mountain

“Beyond the Sea sets us adrift in the unbounded ocean and stuns us with beautiful, fierce insights. After the familiar world has receded and the stories we tell ourselves have dissolved, we are left to confront our barest fears and self-accusations. Paul Lynch submerges us in the wildness of our own minds; I resurfaced changed.” —Chia-Chia Lin, author of The Unpassing

“Combining the sensibilities of a Joseph Conrad or a Cormac McCarthy with the poetic intensity of an Emily Dickinson, this rich, raw, and powerful seascape by Paul Lynch throws the sea’s storms and the sea’s light into the darkest corners of human consciousness. An astonishing achievement.” –Jane Urquhart, author of The Night Stages

“A powerful, heart-breaking story of friendship forged in the most extreme conditions. With its echoes of Greek myth, it yields up those small moments of grace that are deeply transformative.” —Mary Costello, author of Academy Street

This feature require that you enable JavaScript in your browser.
END_OF_DOCUMENT_TOKEN_TO_BE_REPLACED

This feature require that you enable JavaScript in your browser.
END_OF_DOCUMENT_TOKEN_TO_BE_REPLACED

This feature require that you enable JavaScript in your browser.
END_OF_DOCUMENT_TOKEN_TO_BE_REPLACED

This feature require that you enable JavaScript in your browser.
END_OF_DOCUMENT_TOKEN_TO_BE_REPLACED