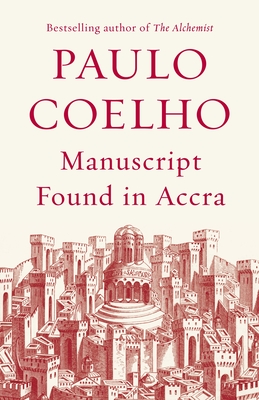 The #1 International Bestselling author of THE ALCHEMIST reveals in this deeply thoughtful novel that the great wisdom of life is that we can be masters of the things that try to enslave us.

“There is nothing wrong with anxiety. Although we cannot control God’s time, it is part of the human condition to want to receive the thing we are waiting for as quickly as possible. Or to drive away whatever is causing fear. Anxiety was born in the very same moment as mankind. And since we will never be able to master it, we will have to learn to live with it—just as we have learned to live with storms."

1099. Jerusalem awaits the invasion of the crusaders who have surrounded the city’s gates. There, inside the ancient city’s walls, women and men of every age and faith have gathered to hear the wisdom of a mysterious man known only as the Copt.

As the wise man speaks of loyalty, fear, bravery and solitude, of love, sex, beauty and elegance, his words offer truth and guidance, and reveal the human values that have endured throughout time—then as now, his words reveal who we are, what we fear and what we hope for the future.

PAULO COELHO is the author of many international best sellers, including The Alchemist, Eleven Minutes, The Pilgrimage, The Fifth Mountain, and Adultery, among others. He has been a member of the Academy of Letters of Brazil since 2002 and in 2007 was named a Messenger of Peace by the United Nations. In 2003, he received the Guinness World Record for most translations of a single title (The Alchemist) signed by the author in one sitting and several years later, in 2009, he received a new Guinness World Record for most translated author for the same book (also for The Alchemist).

Paulo Coelho’s books have been translated into 88 languages and have sold more than 320 million copies in more than 170 countries. His novel, The Alchemist, one of the most influential books of all time, has sold more than 85 million copies and has been cited as an inspiration by people as diverse as Malala Yousafzai and Pharrell Williams. He has received numerous prestigious international awards, including the Hans Christian Andersen Award and the Chevalier de l’Ordre National de la Légion d’Honneur, to name a few.

“Coelho’s writing is beautifully poetic but his message is what counts.” —Daily Express

“His writing is like a path of energy that inadvertently leads readers to themselves, toward their mysterious and faraway souls.”  —Le Figaro

“An intriguing and playful premise.” —The Boston Globe

“Full of worthy musings and quotable quotes on a variety of subjects—from solitude and love to beauty and miracles. . . . Like all Coelho’s other works, the earnestness, simplicity and clarity of [Manuscript Found in Accra’s] prose start touching your soul and transforming your thoughts.” —The International Herald Tribune

“Coelho . . .  shows himself again to be a cerebral and subtle writer.” —The New York Journal of Books

“Spiritualists and wanderlusts will eagerly devour . . .  [Coelho’s] search for all things meaningful.” —The Washington Post

This feature require that you enable JavaScript in your browser.
END_OF_DOCUMENT_TOKEN_TO_BE_REPLACED

This feature require that you enable JavaScript in your browser.
END_OF_DOCUMENT_TOKEN_TO_BE_REPLACED

This feature require that you enable JavaScript in your browser.
END_OF_DOCUMENT_TOKEN_TO_BE_REPLACED

This feature require that you enable JavaScript in your browser.
END_OF_DOCUMENT_TOKEN_TO_BE_REPLACED