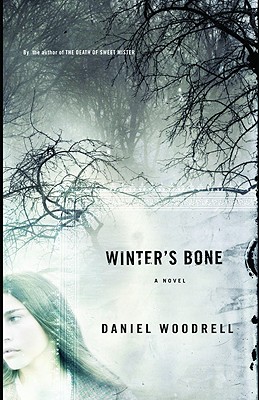 By Daniel Woodrell
$22.99
Email or call for price.

The sheriff's deputy at the front door brings hard news to Ree Dolly. Her father has skipped bail on charges that he ran a crystal meth lab, and the Dollys will lose their house if he doesn't show up for his next court date. Ree's father has disappeared before. The Dolly clan has worked the shadowy side of the law for generations, and arrests (and attempts to avoid them) are part of life in Rathlin Valley. With two young brothers depending on her and a mother who's entered a kind of second childhood, sixteen-year-old Ree knows she has to bring her father back, dead or alive. She has grown up in the harsh poverty of the Ozarks and learns quickly that asking questions of the rough Dolly clan can be a fatal mistake. But along the way to a shocking revelation, Ree discovers unforeseen depths in herself and in a family network that protects its own at any cost. "A piercing, intense tale told from way inside, WINTER'S BONE is stark evidence that Daniel Woodrell is a writer of exceptional originality and importance." -Thomas McGuane "In prose both taut and lyrical, WINTER'S BONE vividly evokes the spirit of one little woman warrior." -Edna O'Brien

This feature require that you enable JavaScript in your browser.
END_OF_DOCUMENT_TOKEN_TO_BE_REPLACED

This feature require that you enable JavaScript in your browser.
END_OF_DOCUMENT_TOKEN_TO_BE_REPLACED

This feature require that you enable JavaScript in your browser.
END_OF_DOCUMENT_TOKEN_TO_BE_REPLACED

This feature require that you enable JavaScript in your browser.
END_OF_DOCUMENT_TOKEN_TO_BE_REPLACED