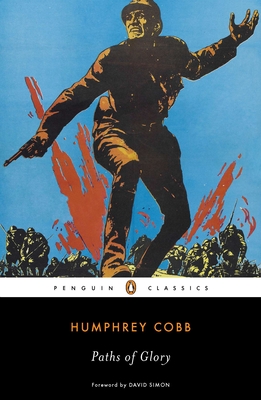 Familiar to many as the Stanley Kubrick film starring Kirk Douglas, Paths of Glory explores the perilous complications involved in what nations demand of their soldiers in wartime. Humphrey Cobb's protagonists are Frenchmen during the First World War whose nightmare in the trenches takes a new and terrible turn when they are ordered to assault a German position deemed all but invulnerable. When the attack fails, an inquiry into allegations of cowardice indicts a small handful of lower-ranked scapegoats whose trial exposes the farce of ordering ordinary men to risk their lives in an impossible cause. A chilling portrait of injustice, this novel offers insight into the tragedies of war in any age.

For more than seventy years, Penguin has been the leading publisher of classic literature in the English-speaking world. With more than 1,700 titles, Penguin Classics represents a global bookshelf of the best works throughout history and across genres and disciplines. Readers trust the series to provide authoritative texts enhanced by introductions and notes by distinguished scholars and contemporary authors, as well as up-to-date translations by award-winning translators.

Humphrey Cobb (1899–1944) was born in Siena, Italy, on September 5, 1899, to Alice Littell Cobb, a physician, and Arthur Murray Cobb, an artist. He attended boarding school in England during his childhood. Cobb was kicked out of an American high school and he never returned to graduate. At seventeen he decided to enlist in the Canadian army. After serving in the army for three years during World War I, he returned to the United States to work by turns in the stock trade, the merchant marines, publishing, advertising, and the Office of War Information (precursor of the OSS, the CIA predecessor) writing overseas propaganda. During his lifetime he wrote Paths of Glory (1935) and None But the Brave (1938), and was the lead screenwriter on the movie San Quentin (1937).

James H. Meredith, a retired United States Air Force lieutenant colonel, is the introducer of the Penguin Classics editions of Paths of Glory by Humphrey Cobb and Bombs Away by John Steinbeck.

David Simon is the creator of the critically acclaimed HBO series The Wire, and the author of Homicide: A Year on the Killing Streets and The Corner: A Year in the Life of an Inner-City Neighborhood.

This feature require that you enable JavaScript in your browser.
END_OF_DOCUMENT_TOKEN_TO_BE_REPLACED

This feature require that you enable JavaScript in your browser.
END_OF_DOCUMENT_TOKEN_TO_BE_REPLACED

This feature require that you enable JavaScript in your browser.
END_OF_DOCUMENT_TOKEN_TO_BE_REPLACED

This feature require that you enable JavaScript in your browser.
END_OF_DOCUMENT_TOKEN_TO_BE_REPLACED