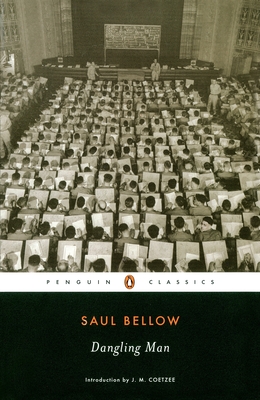 An essential masterwork by Nobel laureate Saul Bellow—now with an introduction by J. M. Coetzee

Expecting to be inducted into the army to fight in World War II, Joseph has given up his job and carefully prepared for his departure to the battlefront. When a series of mix-ups delays his induction, he finds himself facing a year of idleness. Saul Bellow's first novel documents Joseph's psychological reaction to his inactivity while war rages around him and his uneasy insights into the nature of freedom and choice.

For more than seventy years, Penguin has been the leading publisher of classic literature in the English-speaking world. With more than 1,700 titles, Penguin Classics represents a global bookshelf of the best works throughout history and across genres and disciplines. Readers trust the series to provide authoritative texts enhanced by introductions and notes by distinguished scholars and contemporary authors, as well as up-to-date translations by award-winning translators.

Saul Bellow was praised for his vision, his ear for detail, his humor, and the masterful artistry of his prose. Born of Russian Jewish parents in Lachine, Quebec in 1915, he was raised in Chicago. He received his Bachelor's degree from Northwestern University in 1937, with honors in sociology and anthropology, and did graduate work at the University of Wisconsin. During the Second World War he served in the Merchant Marines.

His first two novels, Dangling Man (1944) and The Victim (1947) are penetrating, Kafka-like psychological studies. In 1948 he was awarded a Guggenheim Fellowship and spent two years in Paris and traveling in Europe, where he began his picaresque novel The Adventures of Augie March, which went on to win the National Book Award for fiction in 1954. His later books of fiction include Seize the Day (1956); Henderson the Rain King (1959); Mosby's Memoirs and Other Stories (1968); Mr. Sammler's Planet (1970); Humboldt's Gift (1975), which won the Pulitzer Prize; The Dean's December (1982); More Die of Heartbreak (1987); Theft (1988); The Bellarosa Connection (1989);The Actual (1996); Ravelstein (2000); and, most recently, Collected Stories(2001). Bellow has also produced a prolific amount of non-fiction, collected in To Jerusalem and Back, a personal and literary record of his sojourn in Israel during several months in 1975, and It All Adds Up, a collection of memoirs and essays.

Bellow's many awards include the International Literary Prize for Herzog, for which he became the first American to receive the prize; the Croix de Chevalier des Arts et Lettres, the highest literary distinction awarded by France to non-citizens; the B'nai B'rith Jewish Heritage Award for "excellence in Jewish Literature"; and America's Democratic Legacy Award of the Anti-Defamation League of B'nai B'rith, the first time this award has been made to a literary personage. In 1976 Bellow was awarded the Nobel Prize for Literature "for the human understanding and subtle analysis of contemporary culture that are combined in his work."

John Michael Coetzee was born in Cape Town, South Africa, on February 9, 1940. He studied first at Cape Town and later at the University of Texas at Austin, where he earned a Ph.D. degree in literature. In 1972 he returned to South Africa and joined the faculty of the University of Cape Town. His works of fiction include Dusklands, Waiting for the Barbarians, which won South Africa’s highest literary honor, the Central News Agency Literary Award, and the Life and Times of Michael K., for which Coetzee was awarded his first Booker Prize in 1983. He has also published a memoir, Boyhood: Scenes From a Provincial Life, and several essays collections. He has won many other literary prizes including the Lannan Award for Fiction, the Jerusalem Prize and The Irish Times International Fiction Prize. In 1999 he again won Britain’s prestigious Booker Prize for Disgrace, becoming the first author to win the award twice in its 31-year history. In 2003, Coetzee was awarded the Nobel Prize in Literature.

By the Winner of the Nobel Prize in Literature

“One of the most honest pieces of testimony on the psychology of a whole generation who have grown up during the Depression and the war,” –Edmund Wilson, The New Yorker

“In this imaginative journal, set against fresh and vivid scenes in Chicago, the author has outlined what must seem to many others an uncannily accurate delineation of themselves.” –The New York Times

“An extraordinary first novel.” –The Observer

This feature require that you enable JavaScript in your browser.
END_OF_DOCUMENT_TOKEN_TO_BE_REPLACED

This feature require that you enable JavaScript in your browser.
END_OF_DOCUMENT_TOKEN_TO_BE_REPLACED

This feature require that you enable JavaScript in your browser.
END_OF_DOCUMENT_TOKEN_TO_BE_REPLACED

This feature require that you enable JavaScript in your browser.
END_OF_DOCUMENT_TOKEN_TO_BE_REPLACED