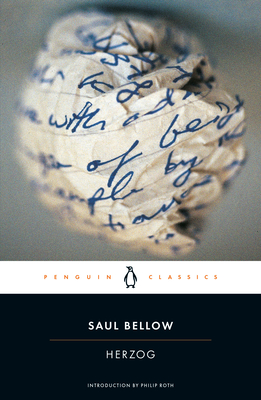 In one of his finest achievements, Nobel Prize winner Saul Bellow presents a multifaceted portrait of a modern-day hero, a man struggling with the complexity of existence and longing for redemption.

This is the story of Moses Herzog, a great sufferer, joker, mourner, and charmer. Although his life steadily disintegrates around him—he has failed as a writer and teacher, as a father, and has lost the affection of his wife to his best friends—Herzog sees himself as a survivor, both of his private disasters and those of the age. He writes unsent letters to friends and enemies, colleagues and famous people, revealing his wry perception of the world and the innermost secrets of his heart.

This Penguin Classics edition features an introduction by Philip Roth.

SAUL BELLOW (1915–2005) won the Pulitzer Prize for his novel Humboldt’s Gift, and was awarded the Nobel Prize for Literature. The only novelist to receive three National Book Awards, he was presented the National Book Award Foundation Medal for Distinguished Contribution to American Letters.

PHILIP ROTH, acclaimed author of Portnoy’s Complaint, The Human Stain, and many other works of fiction, is the recipient of numerous awards, including the National Medal of Arts from the White House.

"A feast of language, situations, characters, ironies, and a controlled moral intelligence . . . Bellow’s rapport with his central character seems to me novel writing in the grand style of a Tolstoy—subjective, complete, heroic." —Chicago Tribune

"Herzog has the range, depth, intensity, verbal brilliance, and imaginative fullness—the mind and heart—which we may expect only of a novel that is unmistakably destined to last." —Newsweek

This feature require that you enable JavaScript in your browser.
END_OF_DOCUMENT_TOKEN_TO_BE_REPLACED

This feature require that you enable JavaScript in your browser.
END_OF_DOCUMENT_TOKEN_TO_BE_REPLACED

This feature require that you enable JavaScript in your browser.
END_OF_DOCUMENT_TOKEN_TO_BE_REPLACED

This feature require that you enable JavaScript in your browser.
END_OF_DOCUMENT_TOKEN_TO_BE_REPLACED