The Last Train to London: A Novel (Paperback) 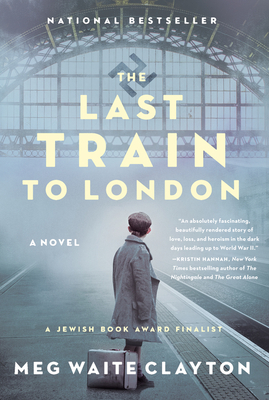 The New York Times bestselling author of Beautiful Exiles conjures her best novel yet, a pre-World War II-era story with the emotional resonance of Orphan Train and All the Light We Cannot See, centering on the Kindertransports that carried thousands of children out of Nazi-occupied Europe—and one brave woman who helped them escape to safety.

In 1936, the Nazi are little more than loud, brutish bores to fifteen-year old Stephan Neuman, the son of a wealthy and influential Jewish family and budding playwright whose playground extends from Vienna’s streets to its intricate underground tunnels. Stephan’s best friend and companion is the brilliant Žofie-Helene, a Christian girl whose mother edits a progressive, anti-Nazi newspaper. But the two adolescents’ carefree innocence is shattered when the Nazis’ take control.

There is hope in the darkness, though. Truus Wijsmuller, a member of the Dutch resistance, risks her life smuggling Jewish children out of Nazi Germany to the nations that will take them. It is a mission that becomes even more dangerous after the Anschluss—Hitler’s annexation of Austria—as, across Europe, countries close their borders to the growing number of refugees desperate to escape.

Tante Truus, as she is known, is determined to save as many children as she can. After Britain passes a measure to take in at-risk child refugees from the German Reich, she dares to approach Adolf Eichmann, the man who would later help devise the “Final Solution to the Jewish Question,” in a race against time to bring children like Stephan, his young brother Walter, and Žofie-Helene on a perilous journey to an uncertain future abroad.

Meg Waite Clayton is the New York Times bestselling author of eight novels, including The Postmistress of Paris (a Publisher’s Weekly notable book; HarperCollins, Nov. 30, 2021), the National Jewish Book Award finalist and international bestseller The Last Train to London, the Langum Award honoree The Race for Paris, the Bellwether Prize finalist The Language of Light, and The Wednesday Sisters, an Entertainment Weekly 25 Essential Best Friend Novels of all time. Her novels have been published in 23 languages. She has also written more than 100 essays, opinions, and reviews for major newspapers, magazines, and public radio. She mentors in the OpEd Project, and is a member of the National Book Critics Circle and the California bar. megwaiteclayton.com

“The Last Train to London is painful and beautiful, absorbing and unforgettable.  A wonderful tribute to courage, to a remarkable woman, to the ones she saved, and the ones she could not.  Recommend this book to anyone who thinks no single person can make a difference.”
— --Karen Joy Fowler, author of the USA Today Bestseller We Are All Completely Beside Ourselves

“The Last Train to London is an absolutely fascinating, beautifully rendered story of love, loss, and heroism in the dark days leading up to World War II.  Clayton perfectly captures the tension and heartbreak of the times, which feel so relevant today. It is a glowing portrait of women rising up against impossible odds to save children.”
— --Kristin Hannah, New York Times bestselling author of The Great Alone and The Nightingale

“What a delight it was to read this brilliant telling of the Kindertransport, a novel threaded with compassion, hope and love. Thank you, Meg Waite Clayton for reminding us of what can happen when good people conspire against evil.”
— --Heather Morris, #1 bestselling author of The Tattooist of Auschwitz

“The Last Train to London is a rare thing: intellectually provocative and emotionally moving in equal measure. What a fine tribute to the victims and survivors of the Nazis’ early terrors, and to the woman who at great personal risk and sacrifice subverted Hitler’s will. Everyone should read this timely, gorgeous novel.”
— --Therese Anne Fowler, bestselling author of Z: A Novel of Zelda Fitzgerald

“This is a standout historical fiction that serves as a chilling reminder of how insidious, pervasive evil can gradually seep into everyday lives.”
— Publishers Weekly

“With its well-developed characters and race-against-the-clock plot, this fantastic novel should have broad appeal, especially with fans of historical fiction and thrillers.”
— Library Journal (starred review)

“Riveting … Clayton makes vivid Truus’s courage and resourcefulness in the face of growing danger as borders close throughout Europe.”
— BBC

“The Last Train to London … glimmers with hope: the heroism of everyday people putting their own comfortable lives in jeopardy to help others.”
— BookPage

&#8220an engrossing, heart-wrenching, and inspiring account of ordinary people making life-and-death choice in the darkest of times.”
— Jerusalem Post

This feature require that you enable JavaScript in your browser.
END_OF_DOCUMENT_TOKEN_TO_BE_REPLACED

This feature require that you enable JavaScript in your browser.
END_OF_DOCUMENT_TOKEN_TO_BE_REPLACED

This feature require that you enable JavaScript in your browser.
END_OF_DOCUMENT_TOKEN_TO_BE_REPLACED

This feature require that you enable JavaScript in your browser.
END_OF_DOCUMENT_TOKEN_TO_BE_REPLACED