The Huntress: A Novel (Hardcover) 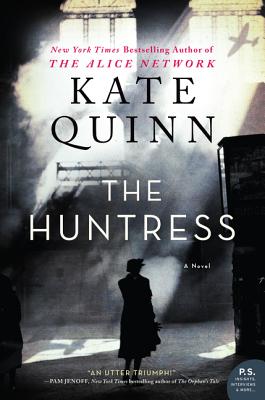 “A Russian night witch and a British war correspondent turned Nazi hunter join forces to track a ruthless assassin in The Huntress, the latest book by Kate Quinn. From the pre-war wilds of the Soviet Union to the streets of a war-torn Germany to the bustle of Boston, Quinn masterfully mixes the past with a post-war present, and it’s phenomenal. Fans of The Alice Network and The Nightingale will love this fantastically fast-paced and utterly exhilarating historical fiction.”
— Kristin Bates, McLean & Eakin Booksellers, Petoskey, MI

“If you enjoyed “The Tattooist of Auschwitz,” read “The Huntress,” by Kate Quinn." The Washington Post

From the author of the New York Times and USA Today bestselling novel, THE ALICE NETWORK, comes another fascinating historical novel about a battle-haunted English journalist and a Russian female bomber pilot who join forces to track the Huntress, a Nazi war criminal gone to ground in America.

In the aftermath of war, the hunter becomes the hunted…

Bold and fearless, Nina Markova always dreamed of flying. When the Nazis attack the Soviet Union, she risks everything to join the legendary Night Witches, an all-female night bomber regiment wreaking havoc on the invading Germans. When she is stranded behind enemy lines, Nina becomes the prey of a lethal Nazi murderess known as the Huntress, and only Nina’s bravery and cunning will keep her alive.

Transformed by the horrors he witnessed from Omaha Beach to the Nuremberg Trials, British war correspondent Ian Graham has become a Nazi hunter. Yet one target eludes him: a vicious predator known as the Huntress. To find her, the fierce, disciplined investigator joins forces with the only witness to escape the Huntress alive: the brazen, cocksure Nina. But a shared secret could derail their mission unless Ian and Nina force themselves to confront it.

Growing up in post-war Boston, seventeen-year-old Jordan McBride is determined to become a photographer. When her long-widowed father unexpectedly comes homes with a new fiancée, Jordan is thrilled. But there is something disconcerting about the soft-spoken German widow. Certain that danger is lurking, Jordan begins to delve into her new stepmother’s past—only to discover that there are mysteries buried deep in her family . . . secrets that may threaten all Jordan holds dear.

In this immersive, heart-wrenching story, Kate Quinn illuminates the consequences of war on individual lives, and the price we pay to seek justice and truth.

Kate Quinn is the New York Times and USA Today bestselling author of historical fiction. A native of southern California, she attended Boston University where she earned a Bachelor’s and Master’s degree in Classical Voice. She has written four novels in the Empress of Rome Saga, and two books in the Italian Renaissance, before turning to the 20th century with The Alice Network and The Huntress. All have been translated into multiple languages. Kate and her husband now live in San Diego with two rescue dogs.

“Quinn deftly braids the stories of a female Russian bomber pilot, Nazi hunters, and a young Bostonian girl staring down evil in the most unthinkable of places.  The result is a searing tale of predator and prey, transgression and redemption and the immutable power of the truth.  An utter triumph!”
— Pam Jenoff, New York Times Bestselling Author of The Orphan’s Tale

“Prepare to be spellbound! The Huntress masterfully draws you in and doesn’t let you go. Another brilliant work of historical fiction by the incomparable Kate Quinn.”

— Susan Meissner, bestselling author of As Bright as Heaven

“The Huntress left me breathless with delight... Kate Quinn has created nothing less than a masterpiece of historical fiction.”

“[A] complexly structured saga delivers exciting aerial sequences and intrigue worthy of a Hitchcock movie. The book’s psychological and dramatic elements combine for a powerful and satisfying finale. To paraphrase one of the characters, Ms. Quinn’s book is “dynamite in print.”
— Wall Street Journal

“Readers should expect to give up weekend plans once they start this novel. A great choice for historical fiction fans, particularly of World War II–set novels, mystery readers, or anyone seeking well-crafted stories in which good triumphs over evil.”
— Library Journal (starred review)

“Well-researched and vivid segments are interspersed detailing Nina’s backstory... a fierce yet vulnerable antecedent to Lisbeth Salander. Quinn’s language is evocative of the period, and her characters are good literary company. With any luck, the Nazi hunting will go on for a sequel or two.”
— Kirkus Reviews

“If you like period dramas, thrillers, female-fronted sagas, or all three, you’ll want to pre-order your copy soon.”
— Marie Claire

“An intense and enthralling mystery. Meticulously researched…the texture and depth that is offered to the world Quinn’s characters inhabit make for an engrossing tale. In The Huntress Kate Quinn has created a gripping and elegant historical mystery— this one is not to be missed!”
— BookBub

“The Huntress reads like the best World War II fiction. [An] engrossing, suspenseful, and authentic book to give you a new perspective on women, war, and the wheels of justice.”
— NPR

“The author of the bestselling book The Alice Network is back with another engrossing (and deliciously long) novel...lots of threads means only one thing: lots of twists.”
— Refinery 29

“Quinn’s narrative is full of suspense. Expertly plotted, with questions of justice at its center, The Huntress is a dark, riveting account of war, revenge and deep human compassion in the face of both”
— Shelf Awareness

“It is brilliantly paced and impossible to put down.”
— Mystery Scene

This feature require that you enable JavaScript in your browser.
END_OF_DOCUMENT_TOKEN_TO_BE_REPLACED

This feature require that you enable JavaScript in your browser.
END_OF_DOCUMENT_TOKEN_TO_BE_REPLACED

This feature require that you enable JavaScript in your browser.
END_OF_DOCUMENT_TOKEN_TO_BE_REPLACED

This feature require that you enable JavaScript in your browser.
END_OF_DOCUMENT_TOKEN_TO_BE_REPLACED