Night of Fire: A Novel (Hardcover) 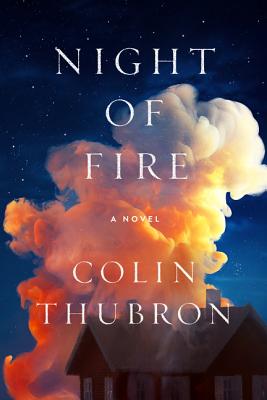 Award-winning, bestselling novelist and travel writer Colin Thubron returns to fiction with his first novel in more than a decade, a searing, poetic masterwork of memory.

A house is burning, threatening the existence of its six tenants—including a failed priest; a naturalist; a neurosurgeon; an invalid dreaming of his anxious boyhood; and their landlord, whose relationship to the tenants is both intimate and shadowy. At times, he shares their preoccupations and memories. He will also share their fate.

In Night of Fire, the passions and obsessions in a dying house loom and shift, from those of the hallucinating drug addict in the basement to the landlord training his rooftop telescope on the night skies. As the novel progresses, the tenants’ diverse stories take us through an African refugee camp, Greek Orthodox monasteries, and the cremation grounds of India. Haunting the edges of their lives are memories. Will these remembrances be consumed forever by the flames? Or can they survive in some form?

Night of Fire is Colin Thubron’s fictive masterpiece: a novel of exquisite beauty, philosophical depth, and lingering mystery that is a brilliant meditation on life itself.

Colin Thubron is the author of seven award-winning novels, including To the Last City, which was long-listed for the Man Booker Prize. He is an acknowledged master of travel writing, and his most recent titles include Behind the Wall, winner of the Hawthornden Prize and the Thomas Cook Travel Award; In Siberia, winner of the Prix Bouvier; the New York Times bestseller Shadow of the Silk Road; and To a Mountain in Tibet. In 2010 he became president of the Royal Society of Literature.

“A vivid and wistful meditation on the mysteries of diverse lands, personality, and memory…Thubron is remarkable for his supple, nuanced prose and concentration on individual personalities as well as place. This evocative and philosophical novel reminds us that such qualities make for powerful fiction as well.”
— Booklist (starred review)

“Each seemingly separate chapter is a gem-perspectives on life and death, love and loss, time and truth, and God…so elegant and poetic that if I could read just one book this year, I would absolutely pick this one.”
— BookBrowse

“Gradually the stories interweave in a way that is both mysterious and mystical, until in the end we are left in a kind of dream world….Veteran travel author and novelist Colin Thubron has produced an engrossing, unsettling and brutally beautiful masterpiece.”
— Daily Mail (London)

“He combines curiosity with erudition, and stylishness with gravitas…. The novel slowly builds into a haunting study of memory, identity and loss…. His calm, contemplative tone and his mastery of imagery are on full display here.”
— Sunday Times (London)

“A work of art that is as thrilling as it is profound…a masterpiece.”
— New York Review of Books

“Night of Fire may be the hottest novel of the year, but the real heat is generated by Thubron’s gorgeous prose and his reflections on the persistence of memory…A profound and exquisite novel.”
— Ron Charles, Washington Post

“An engrossing novel by the celebrated travel writer…Thubron intrigues with his many resonances and takes the reader on a journey through life’s essential questions.”
— Kirkus Reviews (starred review)

“Thubron is one of our greatest living travel writers…his observations are sharp and betray his deep sense of curiosity, and he fashions his many fascinations into prose that reads like poetry.”
— Outside magazine

“In his first novel for 14 years, Thubron returns with what might be his masterpiece…. Thubron’s prose shines a penetrating light on the nature of memory and being human. Sublime.”
— Mail on Sunday (London)

“[Thubron’s] novels and classic travelogues do not seem to spring from disparate parts of the imagination, but rather enjoy a symbiotic relationship that, as he matures, results in increasingly fascinating work…. This outstanding novel confirms that there is nowhere Thubron fears to tread.”
— The Spectator

“Each life story, or a significant scene or event from each, is told with all this writer’s irresistible narrative gift. The novel displays the sensitive curiosity about other lives, and keen observation of how people differ, that distinguishes his travel writing…complex and skilful, yet transparent, without trickery.”
— Ursula Le Guin, The Guardian

“Thubron’s prose is, of course, finely crafted. He veers in style between lyrical heights...NIGHT OF FIRE could best be described as a poetic and erudite meditation on the journey of life.”
— Literary Review

“Thubron pushes gently at great mysteries…. the idea of a catastrophe at the centre of a web of lives recalls Thornton Wilder’s The Bridge of San Luis Rey; the occult connections between characters across time feels closer to David Mitchell’s Cloud Atlas. But this intensely moving book is its own creature, and Thubron is sure-footed amid its profundities.”
— The Sunday Telegraph

“[It is] beautifully written, as vivid as Thubron’s striking travel writing...NIGHT OF FIRE fuses realism with the structure of a modern fable.”
— Times Literary Supplement

This feature require that you enable JavaScript in your browser.
END_OF_DOCUMENT_TOKEN_TO_BE_REPLACED

This feature require that you enable JavaScript in your browser.
END_OF_DOCUMENT_TOKEN_TO_BE_REPLACED

This feature require that you enable JavaScript in your browser.
END_OF_DOCUMENT_TOKEN_TO_BE_REPLACED

This feature require that you enable JavaScript in your browser.
END_OF_DOCUMENT_TOKEN_TO_BE_REPLACED