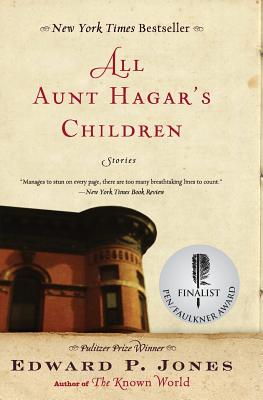 Three years after the publication of his much-heralded, Pulitzer Prize-winning novel, The Known World, Edward P. Jones returned with an elegiac, luminous masterpiece, All Aunt Hagar's Children. In these fourteen sweeping and sublime stories, Jones resurrects the minor characters in his first award-winning story collection, Lost in the City. The result is vintage Jones: powerful, magisterial tales that showcase his ability to probe the complexities and tenaciousness of the human spirit.

All Aunt Hagar's Children is filled with people who call Washington, D.C., home. Yet it is the city's ordinary citizens, not its power brokers, who most concern Jones. Here, everyday people who thought the values of the South would sustain them in the North find "that the cohesion born and nurtured in the south would be but memory in less than two generations."

Edward P. Jones, the New York Times bestselling author, has been awarded the Pulitzer Prize, for fiction, the National Book Critics Circle award, the International IMPAC Dublin Literary Award, and the Lannan Literary Award for The Known World; he also received a MacArthur Fellowship in 2004. His first collection of stories, Lost in the City, won the PEN/Hemingway Award and was short listed for the National Book Award. His second collection, All Aunt Hagar’s Children, was a finalist for the Pen/Faulkner Award. He has been an instructor of fiction writing at a range of universities, including Princeton. He lives in Washington, D.C.

This feature require that you enable JavaScript in your browser.
END_OF_DOCUMENT_TOKEN_TO_BE_REPLACED

This feature require that you enable JavaScript in your browser.
END_OF_DOCUMENT_TOKEN_TO_BE_REPLACED

This feature require that you enable JavaScript in your browser.
END_OF_DOCUMENT_TOKEN_TO_BE_REPLACED

This feature require that you enable JavaScript in your browser.
END_OF_DOCUMENT_TOKEN_TO_BE_REPLACED